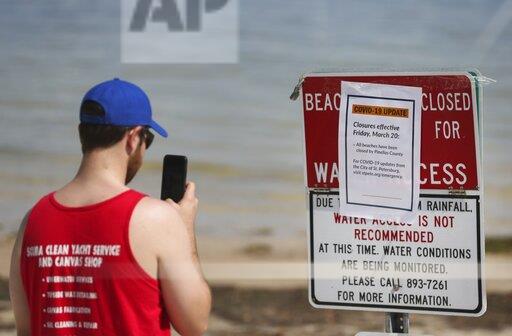 Zac Giparas, 28, takes a picture of the Covid-19 update beach closure sign along the sand at North Shore Park on March 20, 2020 in St. Petersburg. Giparas is a USF grad student currently on spring break.

Stop what you’re doing and don’t you dare walk out that door!

Look around you and think for a second about what you can do if you go outside and live life like nothing is happening. I get it, you’re bored, but boredom doesn’t mean you can go out.

Recently, Florida made headlines when it was revealed that spring breakers were going to the beaches and partying despite the state officials telling people to stay indoors.

“If I get corona, I get corona. At the end of the day, I’m not going to let it stop me from partying,” Brady Sluder said as he was asked about the possibility of him contracting the Coronavirus on an interview with CBS News on March 18.

Sluder would apologize for his comments on his social media a week later.

It hasn’t been as reported as much, but we still see the younger population going outside like nothing is happening. It’s not wrong to want to have a good time with friends and go out to eat somewhere but now is not the time. It’s wrong to be ignorant of what is happening and not take the precautions that the medical profession is giving everyone.

You may not be in a much health risk as your elders, but you can act as a source of transmission for COVID-19 and put whoever you come into contact with at risk.

But it doesn’t stop with just older people. People with health problems such as a respiratory condition, cancer and/or other medical conditions are at a huge risk too because of what COVID-19 does when attacking someone with a weak immune system.

However, there are those who do understand the situation the world is in and are helping out to stop COVID-19 in any way they can. FOX 29 Philadelphia reported on April 1, Taylor Duchnski, a local Philly teen, is using his 3-D printer to print plastic frames for face shields used by doctors and nurses and other medical personnel who are combating COVID-19.

“I heard about other people in Italy using 3D printers to make PPE and I just decided to go online and see what I could do to help,” Duchnski told FOX 29.

There are also those who are being affected and have online platforms that are doing their best to educate and elevate general anxiety.

WFAA, a Dallas news station affiliated with ABC, reported on April 1 of Luke Blazek, a high school senior from Cambridge School of Dallas, created an online platform called “Speak 4 America” to encourage speech and debate amongst his peers.

Now, Blazek’s platform has changed from debating to a place where young people can have their voices be heard regarding COVID-19 and help their communities. Blazek told WFFA, “It gives young people a platform to step up and be leaders amidst this time, especially when so many feel as though this crisis doesn’t apply to them.”

Rachel Garcia, a COD sophomore student, said this in regards to if younger people are taking COVID-19 seriously, “Depends on how young we are considering. Of course, children would not really know what’s going on, they would most likely be making the jokes like teenagers and people in their 20s are. I think the younger population that is making a joke of the situation is only doing so because it is not directly affecting them beyond general social distancing. However, there are those who are being affected or have online platforms that are doing their best to educate and elevate general anxiety. Sometimes these jokes do the trick in moderation. Those who are treating COVID like the next Ebola meme are not being productive like that at all. In general, the younger generation as a whole I think is just trying to adapt to the situation day by day.”

Whichever side you’re on whether you are taking COVID-19 seriously or not, just remember that your actions will affect everyone around you. You aren’t alone in this, the whole world is at risk.

So please! If you are still going outside and partying like there is no tomorrow. Stop! Put the keys down, and stay inside.