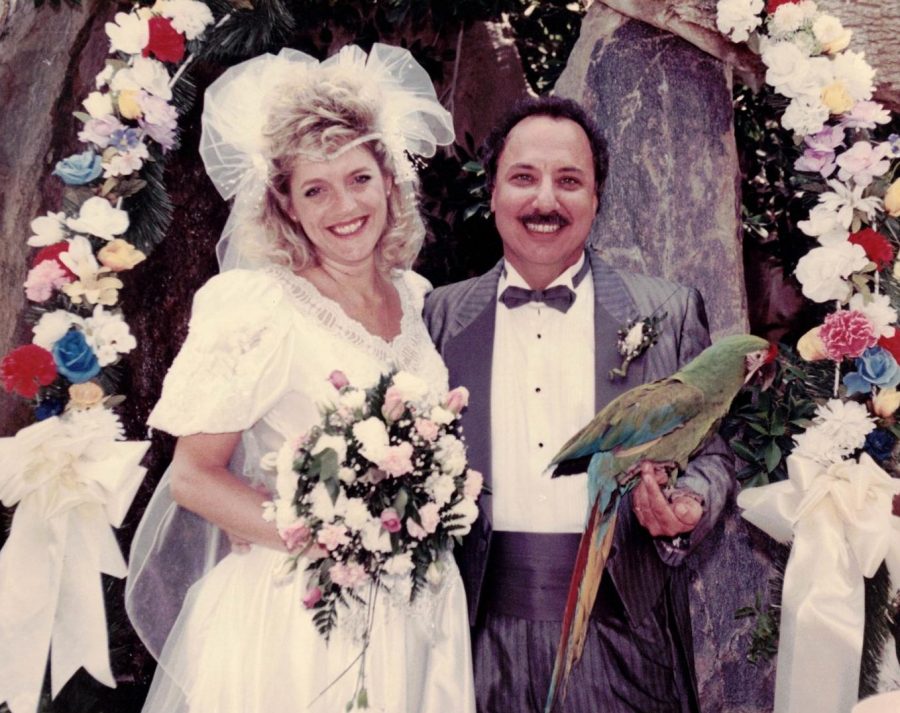 A lighter story to make you smile maybe even laugh during this global pandemic. We call these stories brights in journalism terms. Enjoy.

In 1981, my father, Jeff Berger, opened his business, Exotic Birds Unlimited in Palm Desert. It is within walking distance of College of the Desert on San Pablo. In 1986 he got a clutch of baby military macaws, which are large parrots. He decided to keep one as a personal pet and mascot for the business. He named this baby EBU.

The name EBU is an acronym for the business and from the beginning of EBU’s life, my father and that bird were inseparable. Between 1986 and 1989, my father and EBU lived at home together and went to work together every day until she came. My father said, “When I brought your mother into the house for the first time, EBU did not like her at all. He puffed up and his face went flush red.” My parents dated for 8 months before they were married. My parents wed at Moorten Botanical Garden in Palm Springs and my father was adamant about having EBU on his arm for the whole service. Unfortunately during the service, my mother said, “While the service was going on, EBU tore up the whole bouquet before the service even finished.”

By the time my older brother came around, EBU was not having it. EBU wanted all of the attention and he let everyone know how he felt. He would make the windows shake with his continuous screaming, so with a baby at home, EBU’s new home became my dad’s bird store.

EBU lived at the store for years, he didn’t start coming back to the house until I was about 14 years old. EBU never learned to fly and chose never to, he would actually chew his flight feathers off. With this type of attitude, EBU got used to moving on foot. While at the bird store, EBU’s “office” was the bathroom. EBU would drag cups into the bathroom and hide behind his fortress of gas station coffee cups and a porcelain toilet. If someone entered into his domain, he would burst out from behind the toilet like a bat out of hell. EBU would charge, wings spread out, full sprint, looking like one of those dinosaurs from Jurassic Park.

My mother would always joke and say that EBU is my older brother, I always would tell her that she is just a crazy bird person but now that I am older, I noticed that he kind of is. When I was about 16 years old and EBU was home, he threw a walnut at me from about 20 feet away and I would tease him like the younger brother that I am.

There was another remarkable incident where that bird locked me in the bathroom. While I was working at the bird store, EBU decided to come down from his stand and have a little conversation with me. I was making a mix of bird seed in the back and my father was doing some work on the computer. EBU confronted me and chased me around the store until I ran into the bathroom and locked the door. I could see that bird’s beak trying to reach me under the door. My father said, “I never laughed so hard at that bird and how ridiculous you were.” I can never win when it came to that bird.

My parents are retiring soon and EBU is 34 years old. EBU can live up to 70-80 years. My brother, sister and I are always joking about who will get EBU once my parents pass. But now, we kind of have that in the back of our mind. Who will end up with EBU?