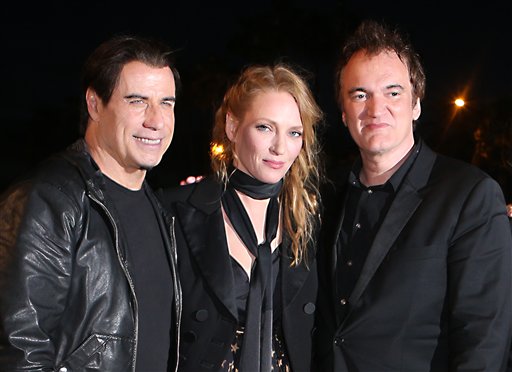 IMAGE DISTRIBUTED FOR MIRAMAX - John Travolta, Uma Thurman and Quentin Tarantino pose together ahead of the beach screening of Pulp Fiction at Miramax's 20th Anniversary celebration of the film at Majestic Beach in Cannes, southern France, during the 67th international film festival, Friday, May 23, 2014. (Photo by Joel Ryan/Invision for Miramax/AP Images)

If you pluck the 1994 script from ‘Pulp Fiction’ and insert it into a 2020 version of the movie, you’ll see that the dialogue and social commentary are as relevant today as it was when Quentin Tarantino directed the movie.

Until ‘Once Upon A Time in Hollywood’, ‘Pulp Fiction’ was considered Tarantino’s masterpiece. The movie premiered at the Cannes Film Festival and took home the coveted “Palme d’Or.” The following year it was nominated for seven Oscars and won for Best Original Screenplay. In 2013, ‘Pulp Fiction’s’ insightful social commentary was recognized by the United States Library of Congress for preservation in the National Film Registry, which deemed it, “culturally, historically or aesthetically significant.”

Through a clever series of interconnected stories, the crime plot follows the lives of two hitmen, Jules (Samuel L. Jackson) and Vincent (John Travolta), and a down on his luck boxer, Butch (Bruce Willis). In a story that is deliberately told out of order, we also meet up with a gangster and his wife, and two wannabe robbers at a restaurant.

Jules and Vincent are accomplished killers. You see it in the way they’re dressed, the professional way they approach a kill, and ironically, their strict adherence to time. As they wait for the kill, they engage in a witty conversation about the merits of massaging feet.

What’s surprising and seems totally out of context, is the insightful psychological arguments the civil exchange. It’s unexpected given the nature of what they do and who they are. The conversation ends with Jules suggesting he’ll give Vincent’s arguments further consideration. They “get into character” and with intelligent style, begin their job of killing the men who stole a briefcase they must also retrieve for their boss.

These unexpected dialogue elements elevate the movie to cult status. If you closed your eyes you would think its two psych students talking, and not two killers. It’s a key element of the movie that is repeated over and over again. The characters’ insights about what drives their behaviors and their observations on why others act the way they do, is simply…jaw dropping.

Butch enters the plot when he is paid off to dive into the fifth round in a boxing match that Vincent and Jules gang boss, Marsellus (Ving Rhames) wants him to lose. Butch is a down in his luck boxer. His claim to fame is the gold watch he proudly wears as a reminder of who he is. The story about how the watch is passed down is again poignant, witty and central to the unfolding of the plot.

There are a series of mishaps along the way of getting the briefcase back to the gangster boss. The movie takes yet another deep dive when Jules believes a miracle has happened. He feels he clearly should have died when someone tried to kill him at close range. It changes him and he decides he wants to retire.

The last act occurs at the restaurant where the movie begins, with the two wannabe robbers sitting discussing why robbing a restaurant is easier than robbing a bank. The attempted heist occurs, but to their misfortune, Jules and Vincent are also at that same restaurant having breakfast after a very difficult night.

The stolen briefcase is now the focal point in the ending. It’s a full-circle moment. And what’s in that briefcase, can only be revealed by those who watch the movie.

I loved Pulp Fiction. I loved how smart it was. I loved how such a large ensemble cast could impeccably deliver such difficult and long passages of dialogue. I loved the cleverly interconnected plot. I loved the wit and relevant social commentary. Quentin Tarantino richly deserves the title of one of the best filmmakers of his generation. Whether it’s 1994 or 2020, he rocks!

You can catch Pulp Fiction on Netflix or Amazon Prime.

Gail Pischak is a third-semester filmmaking student who hopes to make short docs that change for good.