Opinion: It’s time to stand up and be heard 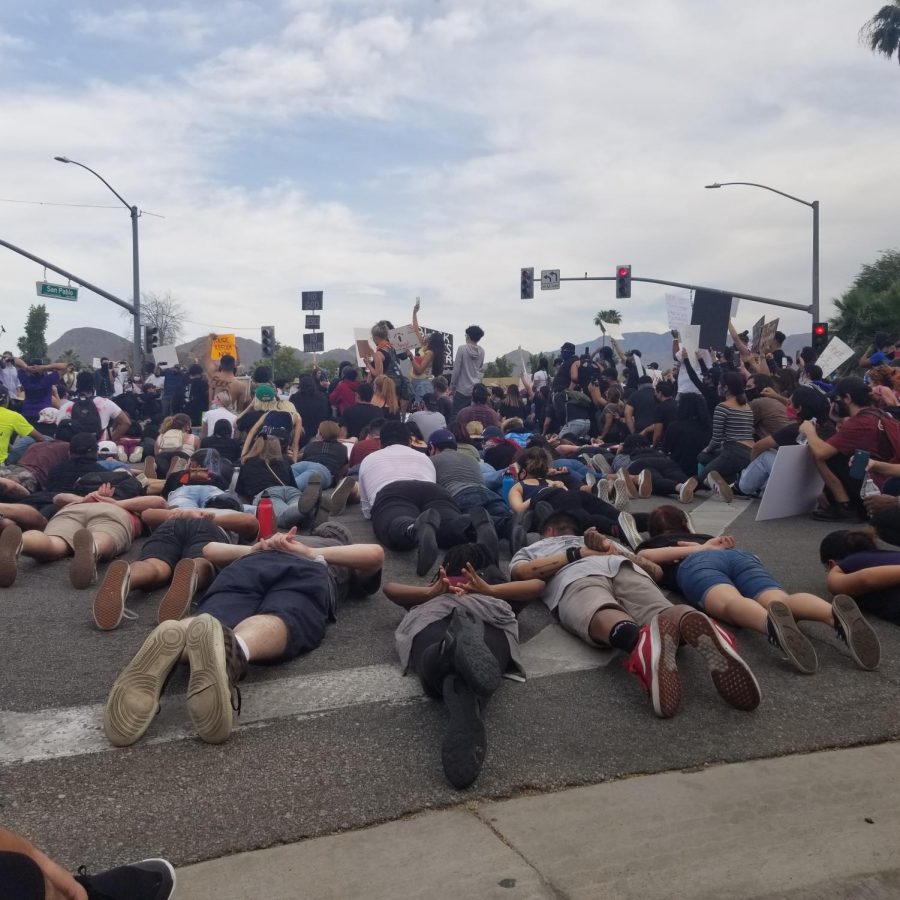 Protesters lay on the pavement while shouting "No justice, No peace" and "I can't breathe," in Palm Desert, June 1, 2020.

I have been thinking and trying to find the right words to express how I feel about everything that is happening across the country; the protests, the riots and mostly about how I feel with the never-ending incidents of police brutality that are happening in the U.S.

But after thinking for days I finally realized that I will never find the right words.

I can only write about the things I see, how they make me feel and what I believe the rest of the country is feeling too. To be honest I see a lot of anger, sadness and some hope.

Anger, because it seems that nothing has changed and racism is still very much part of the country. Anger, because the people who vowed to protect the public have been harassing and killing the black community and it feels like nobody cares. Anger, because instead of going forward we are stuck in a never-ending nightmare.

People feel defeated and it is difficult to keep moving forward. Sadness is all around us; for the people who have lost a loved one for no good reason other than the color of their skin, for the people who will go through the same pain and for all us who are standing in the sidewalks feeling helpless wondering if we will be next.

People do not feel reassured by the word of the people in power and their lack of action just makes their words seemed empty and hypocritical.

While people have been marching in a peaceful manner for weeks now, recently riots emerged across major cities in the U.S. and these have made many scared of what could happen from now on.

I understand why some people are worried, but I also understand the anger of the people rioting. I recently saw a video by stand-up comedian and Daily Show host Trevor Noah and something he said stuck with me. Noah described society as a contract among ourselves in which we followed rules to coexist but what happens when that contract is not beneficial for everyone and he continued by saying, “Because the only reason you didn’t loot Target before was that you were upholding society’s contract. There is no contract if law and people in power don’t uphold their end of it.”

And I am not saying that we should burn down the entire city or that we should be violent towards people who do not share the same views but it is hard to ask people to not be angry, to not take to the streets, to not hate the reality we live in. How do you tell them to stop?

I was there for this march and I saw a lot of support, people being able to express how they truly feel and real engagement from the community. We walked as one!

Many  of the marchers felt the same as I did. La Quinta resident Phylicia Alice Combs said, “I am here because it keeps happening and there is obviously a systemic racial issue going on in our country that really needs to be digested and divulged into and dissected really and this incident isn’t an isolated incident, that’s happened with George Floyd, it continues to happen and the fact that no one is really recognizing patterns. I mean we are as a community but that no one else is trying to is really upsetting.” Combs also added that she could not stay home anymore and said, “I’m black and I can’t sit back and have things like that happen.”

I was not sure if I should go to the march, first because COVID-19 is still a real issue and we should keep practicing health guidelines and second because as a journalism major I tried to not put my opinions out in the public and especially on social media. However, I am also a human and seeing what is happening hurts, it really hurts.

I have experienced racism, for speaking a different language or just for the fact that I was born in another country. I have seen racism happen to friends and family, it is part of my life so to stay home was not an opinion, not again!

But I realized, while walking with others, that I was hopeful. People are talking, protesting, marching and demanding justice and it seems that this time the movement will not slow down.

I think things will finally change for good. I feel hopeful that we are moving in the right direction and moving fast in a call for action. The first steps were taking many years ago by people who we still admire today and now it is up to us to keep the momentum going.

Things will be hard but how much more can we really take and stay quiet about it, now is the time, take action and speak up because we will move forward with or without you.

For information on the Black Lives Matter, organization visit www.blacklivesmatter.com.