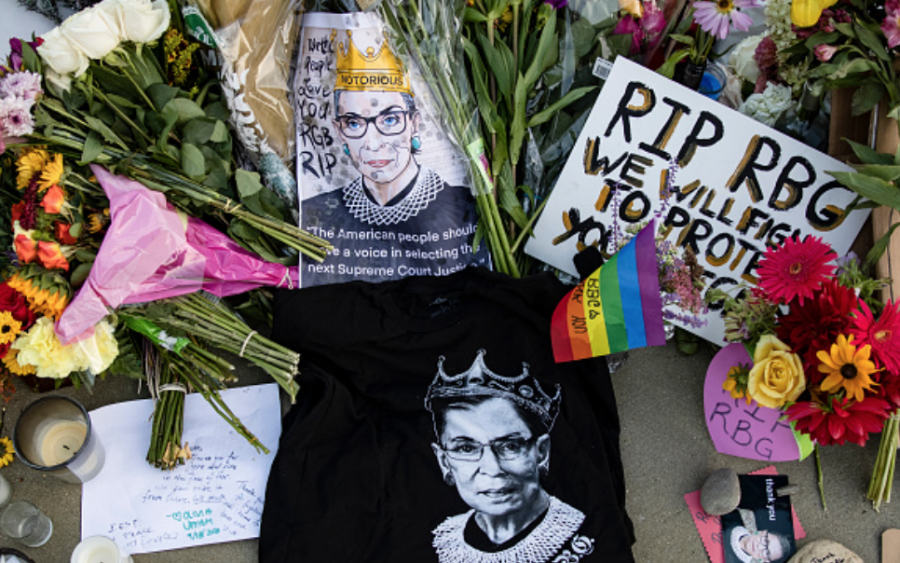 On Sept. 18, 2020, Ruth Bader Ginsburg, the Supreme Court’s former associate justice, passed away at the age of 87. For many generations, this inspirational woman has been a champion of race and gender equality. A tireless and persistent fighter for our civil rights, Ginsburg is a civil hero, an eternal feminist symbol, and has become a significant pop icon in our country.

Ginsburg’s life is a sensational and emotional story that has inspired many Americans to this day. Her legacy has left a definite mark in our nation and one that will never be forgotten. According to The Harvard Gazette, “Her achievements as a litigator made her, as many have said, the Thurgood Marshall of the women’s rights movement.”

Alexandria Rosales is a marketing assistant at CV Rep. She said, “Ruth inspires me to continue chasing my dreams and never feel discouraged to achieve them, just because I am a woman. Her legacy has dynamically expanded the possibilities of family life and work for women and men. If a mother wants to have a career and be a caregiver, it is possible in the U.S. thanks to RBG, and the same goes for men. As citizens, we should all be treated as equal and embrace our uniqueness.”

Born from immigrant parents, Ruth Bader Ginsburg was raised in Brooklyn, New York, and was an honors student in her youth years. Her mother, Celia Bader, supported Ruth on her educational achievements until she passed away the day before when Ruth graduated from James Madison High School. Ginsburg continued her education to Cornell University where she met the love of her life, Martin Ginsburg, had one daughter, and afterward was accepted to Harvard.

Ginsburg was among nine women in a class of 500 or more students. This was the start of her journey, where she encountered many challenges from a sexist system society and personal issues at home. Among the nine women, the law dean asked all the female students to justify taking places at the school that could be occupied by men.

Her husband, Martin Ginsburg, also attended Harvard but was diagnosed with testicular cancer. Ruth B. Ginsburg attended all his classes, including her own, helped him with all his educational papers, had responsibilities raising her daughter, and while at the same time, caring for her husband. With all these personal challenges, Ruth won a coveted seat on the Harvard Law Review.

Eventually, Ginsburg transferred to Colombia University in Manhattan for her last year of law school. She achieved a seat on the law review once again and served for both Harvard and Columbia law reviews, where this was an uncommon achievement for any law student, male or female. She conquered outstanding, stellar academic achievements, yet despite having this enriching scholarly background, she found herself in a sex barrier during the rise of her career development.

Ginsburg had trouble gaining a permanent position in a firm where she initially was employed during her Harvard years. Harvard Professor Albert Sachs of Harvard personally recommended her to Supreme Court Justice Felix Frankfurter. The firm declined to offer her the post of a law clerk because it was too uncomfortable with the thought of a woman in his halls.

Having many issues along her path because she was a woman, Ginsburg served as a clerkship from 1959-1961 with Judge Edmund G. Palmieri of the U.S. District Court for the Southern District of New York. The woman never gave up as she continued achievements when she became associate director of the law school’s Project on International Procedure, learned Swedish (self-taught), and traveled to the University of Lund to educate herself of the Swedish legal system.

According to The Academy of Achievement website, “In 1970, Ginsburg co-founded The Women’s Rights Law Reporter, the first law journal in the United States devoted to gender equality issues. Two years later, she moved from Rutgers to Columbia University Law School, and became the first woman to receive tenure there.” In 1973, Ginsburg argued her first case before the USA Supreme Court. She became the founder of the ACLU’s Women’s Rights Project against sex discrimination. She wrote her first textbook on sex discrimination law, Text, Cases, and Materials on Sex-Based Discrimination, published in 1974.

Melissa Espinoza is a journalism major at Cal State Fullerton, she said, “There are many things I could say about Justice Ginsburg, but what inspired me the most about her, is her determination. She had to fight to find a place in the justice system; she never gave up and continued to pave the road for many more women. I hope that more women, especially in minorities, follow her example and fight against all the obstacles that stand in their way.”

Ginsburg fought for equal pay for women and her fellow professors. She filed an Equal Pay Act complaint and won. Ginsburg also defended women’s reproductive freedom and continued to do so for many years. In several cases, she supported gay marriage to be accomplished. Even though Ginsburg is a famous feminist icon, outside fighting against sex discrimination, she also fought for undocumented people like DACA and unfairness against immigrants. She captured the imagination of a new generation of followers who praised her fierceness, determination, inner strength, and deemed her “Notorious RBG.”

College of the Desert student Laura Martinez, a theater arts major, said, “Ruth Bader Ginsburg has inspired me by her position as the first Jewish woman to have served on the Supreme Court, as well as her focus on gender equality and LGBT rights. Her legacy is important because of what she has accomplished, but it is also important to acknowledge where she fell lackluster, such as her lack of support for people of color. An example of this is Ginsburg’s ruling for Utah vs. Strife, a 4th amendment case focusing on American police racial profiling and unlawful warrant-free searches of individuals for narcotics.”

Martinez continues, “She has also been known for her rulings against tribal sovereignty, equal protections such as the 2019 DACA case, and the rights of the incarcerated. Ginsburg’s legacy gives me the hope for an even more progressive influence on the Supreme Court, who can pick up where she left off and continue to push even further for advocacy of all minorities.”

Ginsburg served the court as she fought for cancer and persevered herself with the will to stay in her position. She passed at her home in Washington, D.C. The announcement of her passing shocked many, and people gathered on the Supreme Court’s steps grieving and sending blessings to a powerful woman and a champion of equal justice.

We will always remember Ruth Bader Ginsburg rest In peace for her legacy and extraordinary achievements.