NFL feels the effect of COVID-19 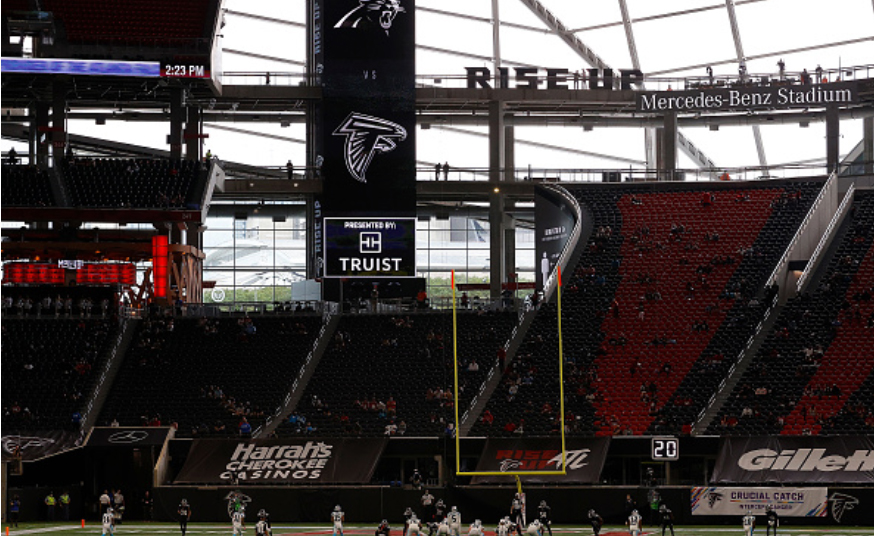 ATLANTA, GEORGIA - OCTOBER 11: A general view of Mercedes-Benz Stadium during the first half of play between the Atlanta Falcons and the Carolina Panthers on October 11, 2020 in Atlanta, Georgia. (Photo by Kevin C. Cox/Getty Images)

The National Football League, like many sports around the world, has had to adapt during the pandemic. It’s one of few sports that did not have to change their schedule too much to accommodate an ever-changing world. It’s inevitable that some players will get COVID-19. The NFL is not as strict as the NBA and NHL.

We live in an imperfect world. The coronavirus has changed how the NFL scheduled games and how players make decisions that don’t just affect them but the whole league.

The Tennesse Titans were the first team to have a major outbreak of COVID-19. On Sept. 24, at least 21 players and personnel had positive tests, which caused their game on Sunday, Sept. 27, to be postponed. Their week five game has been moved to Oct. 13, becoming only the second game to be played on Tuesday.

This doesn’t just affect them, but the team they played, the steelers, who now must alter their schedule and used the valuable time for it all to be for nothing.

The NFL schedule is 17 weeks to allow for all teams to have a bye week as they would have during no-COVID seasons. With the Titans and Steelers having their game moved, it causes the NFL to come up with new options. Some possible solutions are having a week 18 and possibly 19 for canceled games, forfeit games for teams with COVID, top winning percentage teams get to the playoffs, and if an extreme breakout happens, the seasons are canceled.

The best option for the NFL would be to have a max of two weeks at the end of the season for games that need to be rescheduled. Another option for rescheduled games to be played on goodbye weeks is to play in the same week.

The NFL is a multi-billion-dollar company, which makes it unlikely that they would want to cancel the season unless a major outbreak happened because of the loss of revenue.

Even though a few games have been affected, only the titans have had a significant outbreak. With just being severely affected, the fairest way to penalize a time is for them to forfeit. If both teams have a breakout, each team will lose that game because their records will be invalid if they tied the game.

The NFL and Formula 1 are both sports that currently have teams traveling but have different ways of keeping COVID from spreading throughout a team.

At a Formula 1 event, every department of the race teams is kept in their bubble to control the spread to a minimum if they get a positive test. When watching a football game, the whole team is in a designated area, but offense, defense, and special teams can be within touching distance.

The players are free to live an everyday life outside of football. This is the easiest way for players to get the virus. The league needs to mandate that all teams only have Mondays and Tuesdays to themselves and their family. Then starting Tuesday night, they are tested and are notified if they are the positive or negative test.

When receiving a negative test, they can return to team facilities but must remain at a team hotel or practice facilities for the remainder of the week or until they leave for their away game.

Most sports use a bubble that allows for the sport to contain teams during the playoffs to keep the spread down to a minimum. With more teams added to the playoffs this year, there are three wildcard games per conference, rather than two.

They could have the NFC play in Los Angeles, Las Vegas and Santa Clara, California. Then have the AFC play in Houston, Texas, Dallas and Glendale, Arizona. Having games in different cities allows them to prepare for the teams. No matter who makes the playoff, the league will already have strict protocols at practice facilities, hotels, team planes, and the stadiums.

At the SuperBowl, both teams will have to stay in the designated city to allow both teams to remain COVID free, and if they test positive before leaving, they can go to that city when they receive positive.

The NFL is the most profitable league with billions in revenue, but when it comes to COVID, they are behind every other sport. With their inability to be proactive, it could lead to struggles later in the season as they are afraid to enforce strict mandatory rules when not at the games.

As fans, we want don’t want to see games moved or players to miss them, but as time goes on, we can only expect more of this to happen.

For more news on the NFL, visit ESPN.com or NFL.com.