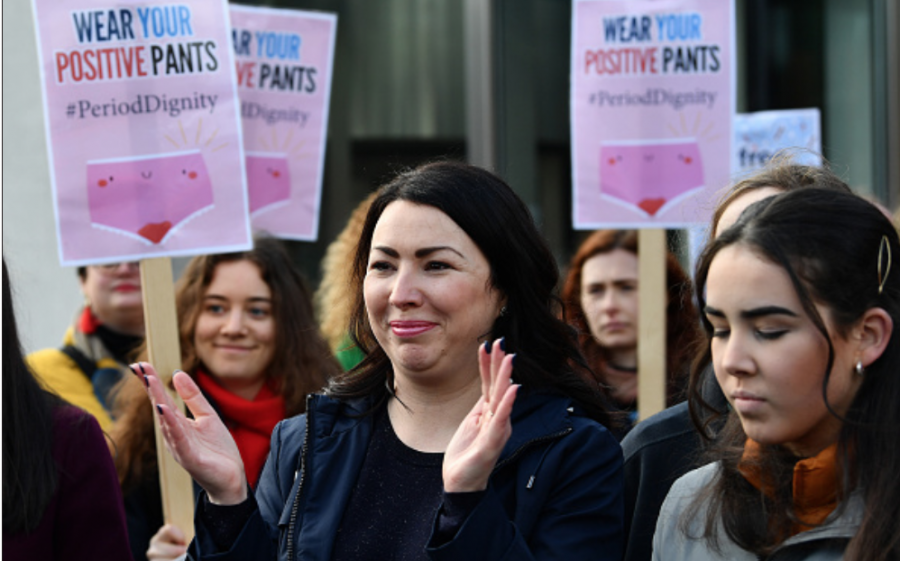 Photo courtesy of Getty Images. MSP Monica Lennon joins campaigners and activists during a rally outside the Scottish Parliament in support of the Scottish government's support for the Period Products Bill on February 25, 2020 in Edinburgh, Scotland.

Scotland is one step closer to becoming the first country in the world to make women’s feminine products such as tampons and pads free to anyone who needs them.

Scotland passed the first of three stages in the Scottish parliament on Nov. 24. 2020 by a vote of 112-0, with one abstention; the bill is called the Period Products (Free Provision) (Scotland) Act. The Period Products Bill was first proposed in 2017. Member of the Scottish Parliament (MSP), Monica Lennon, led a three-year campaign to support this bill.

The Scottish government has to ensure that period products are available for free for those who need them. It is estimated the cost to implement the legislation at 24 million Euros annually, about 31 million dollars.

The Period Products Bill aims to help women with “period poverty,” in which girls and women have difficulty accessing or affording menstrual products.

According to the National Public Radio’s (NPR) website, a member of the parliament cited a 2019 report on the issue of suggesting that while women can afford to purchase their sanitary products, those who most need the free products are the ones who are almost guaranteed not to ask for them.

In 2018, Scotland’s government made period products free in schools, colleges and universities, which are the first to do so.

A Scotland program surveyed 2,000 students and found 1 out of 4 students struggled to get sanitary products. England has also had a similar program that makes tampons and pads free at state schools and colleges. Some states in the U.S. have moved to outlaw taxes like “pink tax” on menstrual products, such as New York, Nevada, Florida, Connecticut and Illinois.

Women’s periods are still rarely discussed in public. Many of which many women are embarrassed to talk about the topic publicly. Neil Findlay, a member of parliament, said, “The barrier of our inability to discuss such serious issues about our health and well-being in the media or public without embarrassment, reticence and discomfort.”

He adds, “It has allowed people to talk about the issues without embarrassment or stigma, which is a very good thing.”Alison Johnstone, a parliament member, asked, “why is it in 2020 that toilet paper is seen as a necessity but period products aren’t?” She said, “This is often characterized as a women’s issue, but it’s not. It is a social justice issue; it is estimated that a woman will, over her lifetime, spend approximately £5,000 on period products.”

Johnstone also pointed out that women are financially penalized for a natural body function; she further explains that period products deny women access to education, work, sports and much more.

An article on World Economic Forum (WEForum) explains that many students in “period poverty” have had to use different products that they can easily get or already have other than pads and tampons such as toilet paper, socks or newspaper.

According to WEForum, about 45 percent of girls in Scotland have had to use toilet paper or other alternatives during their periods because they could not afford to buy sanitary products discovered in research by Children’s Charity Plan International.

A British maker of sanitary products said, “This month placed adverts in newspapers featuring a cut out “make your own” pad, is to make public awareness. Monica Lennon is thrilled that many people support this bill and pass without anyone objecting to it.

Lennon told Daily Record, “This is an amazing victory for everyone who has campaigned for free universal access to period products and who has convinced the Scottish Government to back this ground-breaking Bill.”

Lennon adds, “Scotland has already taken important steps towards improving access to period products and tackling stigma, but legislation will guarantee rights, ensure that current initiatives continue in future on a universal basis, and will help us achieve period dignity for all.”

Has the pandemic made an impact on students who can’t afford sanitary products?

Due to the pandemic, it has been difficult for students to get a pad and/or tampon. Since the lockdown, many girls didn’t have access to free tampons and pads how they normally got them in their school.

Many students had to go back to their old ways of using toilet paper, tea towels, newspaper, and pillowcases because of the closure. Ajmal, a young girl who gets sanitary products from her school’s nurse, said, “Getting your period isn’t a choice, so it’s not really fair we have to pay this amount of money to get something we need, and if we don’t have that money we can’t get it.”

Tina Leslie runs a charity named Freedom4Girls, and she said, “We normally deliver about 500 pads, tampons, and liners a month. But since the start of the lockdown, it had distributed more than 7,500 packs.”