Superbowl 55: The GOAT remains the GOAT 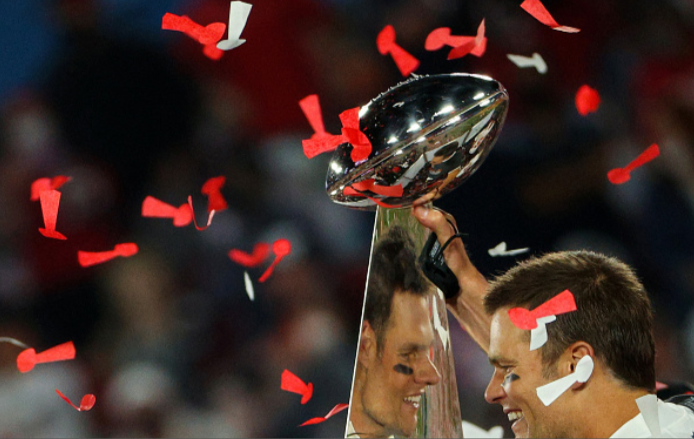 Photo courtesy of Patrick Smith/Getty Images. Tom Brady #12 of the Tampa Bay Buccaneers celebrates as he is reflected in the Lombardi Trophy after defeating the Kansas City Chiefs in Super Bowl LV at Raymond James Stadium on February 07, 2021 in Tampa, Florida.

On Sunday, February 7, 2021, the Tampa Bay Buccaneers took on the Kansas City Chiefs in Super Bowl 55, where Tampa Bay would win 31-9.

The biggest headline of the day was Tom Brady going for his 7th Super Bowl ring while the Kansas City Chiefs looked to repeat as Superbowl Champions. It wasn’t just the Buccaneers vs. the Chiefs or Brady vs. Patrick Mahomes. It was also Tom Brady vs. time.

For the past five years, sports analysts have debated whether or not he should retire or continue playing. Since then, he has been to the Super Bowl four times, winning three of the four, making him the oldest quarterback to win a Super Bowl, breaking his own record from two years ago.

Brady was not the only one to set records; Bruce Arians became the oldest head coach to win a Super Bowl. Not only that, but the Buccaneers became the first team to play and win the Superbowl in their own stadium.

With the Chiefs scoring the game’s first points, the game started slowly, getting a field goal with just over 5 minutes left in the first quarter. Brady fired back by leading his team downfield before throwing an 8-yard touchdown to tight end Rob Gronkowski, ending the first quarter 7-3. With only 6 minutes left in the second quarter, Brady threw the ball to Gronkowski again, this time for a 17-yard touchdown, making it 14-3.

Mahomes and the defending champions weren’t going to give up. The Chiefs drove down the field, coming up just short of the end zone but could still put points on the scoreboard with a field goal, making it 14-6 with just over a minute left before halftime. This was even more than enough time for Tom Brady to strike again. Tom led his team downfield, this time throwing a 1-yard touchdown pass to wide receiver Antonio Brown with ten seconds left before halftime, making it 21-6.

The Chiefs were not new to being down on the biggest stage. In the previous year’s Superbowl, they scored 21 unanswered points to come from behind and win. At the start of the third quarter, Mahomes came out the tunnel knowing what he had to do to get his team back into the game. Unfortunately, the Tampa Bay defense was too much for the reigning Superbowl MVP as Patrick Mahomes, and the Chiefs were forced to settle for another field goal.

Just like Mahomes, Brady knew he would not be able to let off the gas, or they could blow a huge lead. He leads his team downfield, and with a 27-yard touchdown run by Leonard Fournette, the Buccaneers led 28-9. At this point in the game, both offenses were drained, and both defenses were looking more determined to get a stop for their offenses. The Buccaneers ended up scoring their final point of the game with a field goal, and the last time either team scored, making it 31-9.

This win was huge for the entire Tampa Bay Buccaneers organization, but more importantly for Tom Brady. Many have been doubting Brady in recent years, saying “he’s too old ever to win again” or “he only won those championships because of his coach,” but there was Brady with a new team and new coaching staff picking up exactly where he left off.