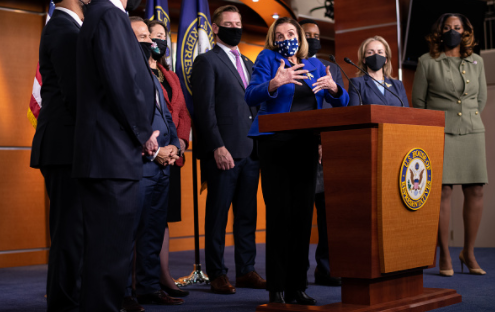 Photo courtesy of Graeme Sloan/Bloomberg at Getty Images. U.S. House Speaker Nancy Pelosi, a Democrat from California, center, wears a protective mask while speaking during a news conference with House impeachment managers at the U.S. Capitol in Washington, D.C., U.S., on Saturday, Feb. 13, 2021.

All 50 Democrats and only seven Republicans voted Trump guilty, falling short of two-thirds necessary for conviction.

Here are a recap and takeaways from the week’s event.

On Feb 10 and 11, the prosection’s opening arguments began. They tried to prove that “Trump incited an insurrection by encouraging those who stormed the capitol and disrupted the counting of Electoral College votes.” According to the New York Times. The Democrats knew they had to persuade at least 11 out of 44 Republicans that Trump was guilty. The Democratic House presented evidence that Trump encouraged his supporters to take action at the capitol, urged his supporters to ‘fight much harder’ against ‘bad people’ and ‘show’ at the capitol.

On Feb. 12, Trump’s lawyers laid out their defense. Trump was reportedly disappointed with his defense team. His lead attorney Bruce Castor made a mess a few days before their trial by talking down on the state party he was supposed to fight for. He called Trump’s supporters ‘weird worshipers’. He also referred to Trump as the ‘former president.’

“Trump, according to those familiar with his thinking, saw his legal team’s performance as a missed opportunity and also was annoyed by the public criticism of his attorneys,” according to a Politico article.

If Trump were impeached by the House and convicted by the Senate, he would not be allowed to run for office again. According to the Constitution Article 2, Section 4, “The President, Vice President and all civil Officers of the United States, shall be removed from office on impeachment for, and conviction of, treason, bribery, or other high crimes and misdemeanors.”

Trump’s lawyers used the fact that Trump was no longer in the office to their advantage. “The Senate cannot bar Trump from holding office in the future under the 14th Amendment because removal is a precondition for disqualification, and as a private citizen, the body has no jurisdiction over him,” said Trump’s defense lawyers.

Those fighting to impeach Trump talked about the controversial rally Trump organized where he encouraged his supporters to, Walk down to the Capitol and cheer for only some congressmen and women. Not all because you’ll never take back our country with weakness. ”

On Feb. 13, Trump was acquitted. Senate Minority Leader Mitch McConnell (R-Ky.) said that the former president is “practically and morally” responsible for provoking the Jan. 6 attack. He added that the Senate was upholding the Constitution by acquitting him.

“The Senate’s decision today does not condone anything that happened on or before that terrible day. It simply shows that senators did what the former president failed to do: We put our constitutional duty first,” McConnell said.