Some americans expected to get their stimulus checks this week. 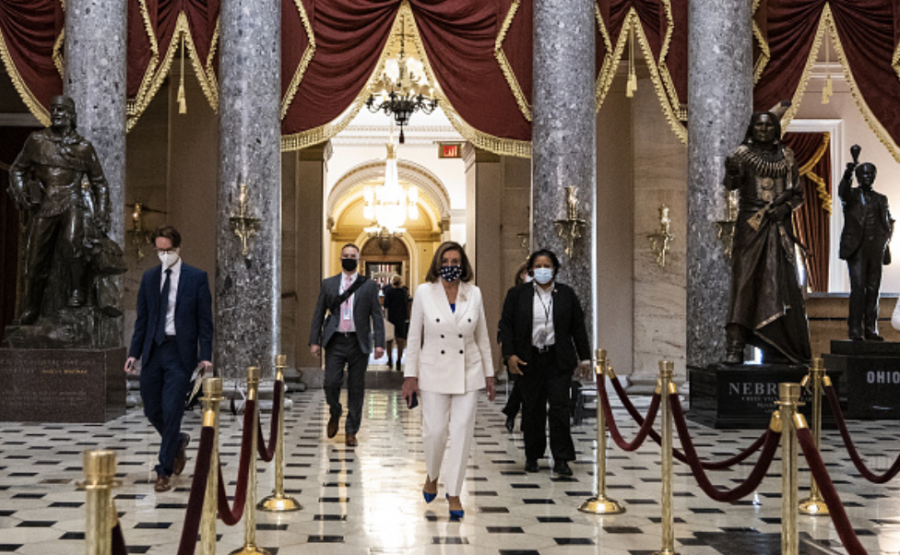 Photo courtesy of Samuel Corum/Getty Images. U.S. House Speaker Nancy Pelosi walks to her office from the House floor at the U.S. Capitol in Washington, D.C., U.S., on Wednesday, March 10, 2021. The House is poised to send the $1.9 trillion COVID-19 relief plan to President Biden for his signature.

Millions of Americans and those in legislation have been pushing for another stimulus check since Dec. of 2020, which is designed to ease and reduce the financial constraints and hardships of those who the pandemic has impacted.

Biden signed The American Rescue Plan, which not only authorizes the third round of stimulus checks but will also provide an extra $300 in unemployment insurance, $26 billion in housing and rental assistance as well as $20 billion in the state, county, city and tribunal funding for essential workers to remain on the payroll. Biden’s plan will also include $350 billion in aid to state and local governments to assist families and communities impacted by the pandemic.

“This historic legislation is about rebuilding the backbone of this country and giving people in this nation, working people, middle-class folks, people who built the country a fighting chance, that’s what the essence of it is,” Biden said before signing the bill.

The legislation will provide direct payments of $1,400 for single taxpayers, $1,400 for dependents and $2,800 for married couples who file jointly.

“When the pandemic hit and non-essential jobs started shutting down, I became really worried,” said Adrianne Braxton, a Coachella Valley resident. “I worked in a salon as a hairstylist. That was my main stream of income.”

Braxton added, “I wasn’t sure about the stimulus checks at first, but the extra money has really helped me.”

On top of using stimulus funds for essentials such as grocery shopping and bill payments, many people also see it as an opportunity to save some money and pay off debt.

Coachella Valley resident Carol Maldonado and her husband Joe Maldonado, like many Americans, have both suffered employment loss due to the pandemic. The couple said they plan on putting their stimulus funds in savings.

“At some point, our economy will go back to being stable,” the couple said. “In the meantime, we plan on saving as much as we can.”

During the release of the first and second stimulus checks, Americans checked the status of their stimulus payments through the Get My Payment portal on the IRS.

The IRS will be scheduling an update on their website on Monday, March 15. American’s will be able to check the status of their stimulus checks, confirm payment type, and find out the delivery dates for electronic payments and paper checks.

What is still unconfirmed is whether people who have not filed their tax returns will be able to check their stimulus checks through a non-filer tool as they were able to during the second round of stimulus checks on Dec. 29, 2020.