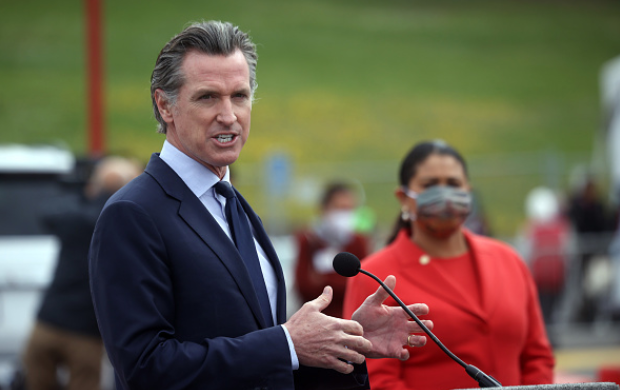 Photo courtesy of Justin Sullivan/Getty Images. California Gov. Gavin Newsom (L) speaks during a news conference after touring the vaccination clinic at City College of San Francisco with San Francisco Mayor London Breed (R) on April 06, 2021 in San Francisco, California. California Gov. Gavin Newsom announced that the state of California has administered over 20 million vaccinations and currently has the lowest positivity rate in the United States. The governor also announced that California is on track for a full reopening by June 15th with continued mask wearing and people getting vaccinated.

After more than a year of being in a pandemic, California Governor Gavin Newsome announced that on June 15 that the state will be fully reopening. California has been in a lockdown with different levels of restrictions in each county based on how COVID-19 is spreading within a given county.

“We will be moving beyond the blueprint, and we’ll be getting rid of the colored tiers,” Newsome said. ” We’re not anticipating in the short run lifting the mandate for masks. We think it’s incredibly important it’s the most powerful and important non-pharmaceutical intervention we can do to mitigate the spread,” said Newsome.

The colored tiers, according to the CDC are:

California has 22 counties in the red tier, 33 in orange, 3 in yellow, and none in the purple tier.

Although they’re millions of people receiving vaccines, Newsome doesn’t want to underscore the threats from different variants worldwide that have appeared in California. “851 UK variants we have sequenced in the state, 10 south African variants, 35 Brazilian variants close to 9,400, west coast variants, and we are also tracking the number of other new variants, one from India,” Newsome said.

College of the Desert has had remote learning for most classes since Spring 2020. With students and professors hopeful that some classes will be back for fall. “There’ll be no barrier to getting all of our kids safely back not just k-12 but also community colleges including institutions of higher learning so on,” said Newsome.

Many large events are still planned throughout the year, and with people eager to finally see the light at the end of the tunnel, many are still worried about the risks that COVID-19 can have on people.

Coachella Valley resident Jhordao Ruiz said, “I feel as though my worry goes to my parents as they barely started getting the vaccine. Everything opening up soon could mean those that don’t have the vaccine yet or refuse to get the vaccine will get infected.”

Many events were canceled, such as Stagecoach, Coachella Valley Music and Arts Festival, and many others have been still allowed to go through with the scheduled events.

In June, music festivals will begin to happen across southern California. When asked if he was worried at all about potentially getting COVID-19 or being around a lot of people. Ruiz said, ” I will be in quarantine and getting COVID tested as soon as I’m done with the festival. I worry about my family contracting the virus.”

This becomes difficult because businesses and the state are opening up it puts many people at risk.

Ruiz is currently a grocery store employ and sees how difficult the times are. “People don’t follow the basic mask rules, and I feel that the COVID restrictions are not severe enough and should be enforced, with more severe punishments.”

Starting April 15 everyone 16 and older became eligible to receive the COVID-19 vaccine, according to the California Department of Health.

To find out the nearest place to get vaccinated, visit CDC.gov.