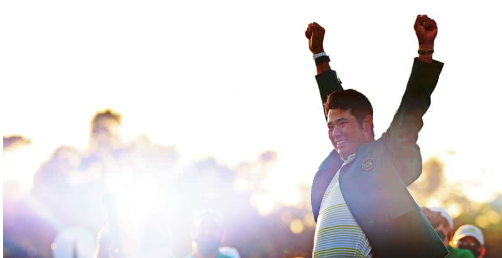 Photo by Mike Ehrmann/Getty Images. Hideki Matsuyama of Japan celebrates during the Green Jacket Ceremony after winning the Masters at Augusta National Golf Club on April 11, 2021 in Augusta, Ga.

After being founded in 1934, the Masters Tournament has turned into one of the most widely and popular known golf tournaments around, being home to some of the greatest golfers ever to play. The tournament is typically played during the first week of April over 4 days and 72 holes. Founded by Bobby Jones and Clifford Roberts, the tournament seems to provide a service to golf by hosting the annual event.

Hideki Matsuyama made his Masters debut in 2011 and won his division which is now known as the Asia-Pacific Amateur. He returned to Augusta, where the tournament is held, in 2012 and defended his title, where he won again. Entering the 2021 tournament, this was going to be his 10th Masters appearance, having finished in the top 15 four times previously. Back in 2015, Hideki was able to pull out a 5th place finish, being the best he had ever done at the Masters

The tournament started with everyone having their eyes on one person and his story but ended with everyone having their eyes on Hideki. He was able to capture his first Masters win finally. Not only did he make history for himself, but he did it for the entire country of Japan, being the first from his country ever to win the tournament. Hideki became the 7th golfer to win the coveted Green Jacket after being Low Amateur, joining some of the greatest to ever play, such as Jack Nicklaus, Phil Mickelson and Tiger Woods.

“Hopefully, I will be a pioneer, and many more will follow,” said Hideki through his interpreter. after his win, “It’s thrilling to think there are a lot of youngsters in Japan watching today. Hopefully, in 5, 10 years, when they get a little older, some of them will be competing on the world stage.”

College of the Desert student-athlete Taishin Matsushita said, “I think he has achieved the most wonderful achievement as a Japanese man, I do not play much golf myself, but I think the number of golfers will go up in Japan simply because of what Hideki has done. He has proven it doesn’t matter where you come from. You can always do it.”

This year has been a struggle for Hideki. He said about his win, “No top-10 finished, I haven’t ever contended, so I came to Augusta with little or no expectations. But as the week progressed, as I practiced, especially on Wednesday, I felt something again. I found something in my swing. And when that happens, the confidence returns. I started the tournament with a lot of confidence.”