McCallum to welcome audiences back in December with new season lineup 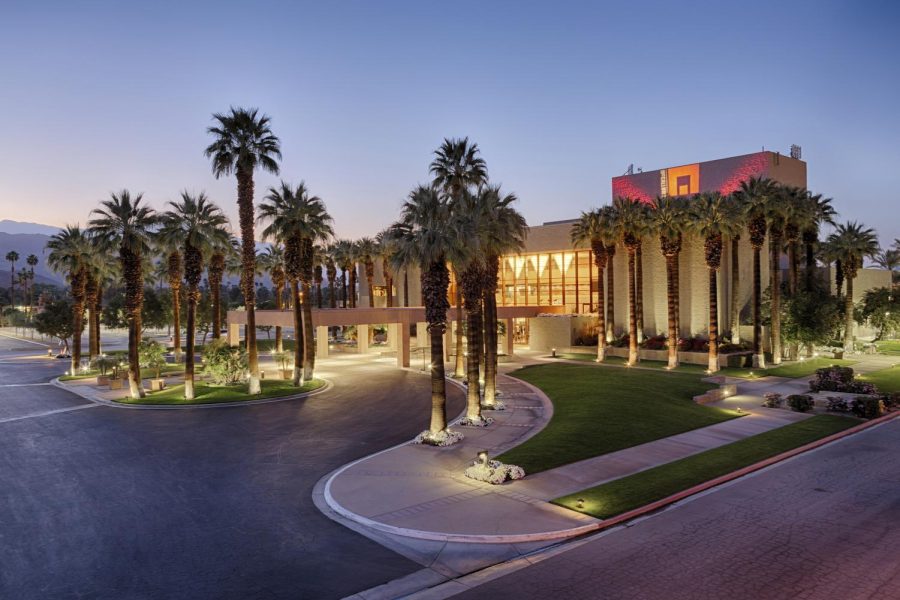 Courtesy of the McCallum Theatre.

The McCallum Theatre is located next to College of the Desert's Palm Desert Campus.

The McCallum Theatre announced that it would reopen its doors for the 2021-2022 season. The McCallum released a full line-up of performances that will host patrons beginning Dec. 3, 2021.

Jamie Grant, who was appointed as the new president and CEO of the McCallum Theatre in June, said in a press release, “It’s virtually impossible to think about the theatre being empty for over a year, and closer to two years by the time the curtain rises again.”

Grant added, “We have lived through the most challenging period in most of our lifetimes, but through the generosity of so many people who genuinely care about the theatre, the McCallum will emerge from this horrific pandemic stronger than ever. We have been working hard to put together a season that is all at once exciting, familiar, and celebratory. We believe we are finally at a place where we can imagine the safe return to live performance in a full audience chamber. We are thrilled to share our new season (a little bit later than normal) with our Coachella Valley neighbors, who are eager to return to the Theatre. We can’t wait to do what we do again.”

The McCallum Theatre closed its doors in March of 2020 at the beginning of the pandemic as COVID-19 cases began to rise, and both the state and federal governments were restricting indoor outings.

The new season includes an assortment of McCallum’s “greatest hits,” including iconic superstars, long-awaited return visits from show business royalty, plus a robust music and variety lineup and an impressive array of Broadway’s most cherished, long-running shows.

The official start of the 2021-2022 McCallum Theatre season will be from Dec. 3-5 when the hit musical, “Hairspray,” and the 2020-2021 lineup include many titles such as “Barry Manilow’s A Gift of Love V,” “Fiddler on the Roof,” “Jersey Boys,” “Beautiful: The Carole King Musical” and many more.

Other notable acts from the announcement included comedy acts from Jeanne Robinson, who went viral for videos such as “Don’t Bungee Jump Naked” and former “Tonight Show” host Jay Leno.

Tickets are available by phone or online at www.McCallumTheatre.com. A full list of the lineup will be on their website as well. There are no walk-up orders. The box office located at the McCallum Theatre is open solely for ticket information and order support. The only way to purchase tickets is through the theatre’s official website.

“It is also important for the community to know that the McCallum leadership team has spent months and months working closely with public health officials, as well as our friends at Eisenhower Health to ensure that not only will you be safe when you return to the McCallum, but you will feel safe.”

Grant continued. “Safety of audiences, artists, staff and volunteers is our top priority. All appropriate safety protocols will be well in place (and adjusted as necessary) by the time audiences return, including new air filtration systems, touchless technology throughout the facility, and state-of-the-art cleaning and protection procedures.”

“Additionally, ticket-buyers need not be concerned about receiving a refund should performances get canceled,” said Grant.

The McCallum was one of few theaters in the nation to refund every penny for all of the canceled shows in the 2020-21 season, and we are committed to continuing that policy should events preclude a show to be presented.”

“We know that when life returns to normal, The McCallum Theatre will be here doing what we have done for over 30 years – providing the best in world-class performances to our community and life-changing art education for our children throughout Riverside County,” added Grant. “As the new guy in town, I can’t wait to meet our audiences and welcome them back personally to their McCallum Theatre.”

Before announcing the new lineup, the McCallum Theater was educational virtual programming for students around the Coachella Valley and beyond.

33 classrooms participated in the aesthetic education program, which conducted 30 minutes Zumba classes before presenting “The Miraculous Journey of Edward Tulane” and “The Planets,” which prepared Elementary School students for more in-depth theater experiences.