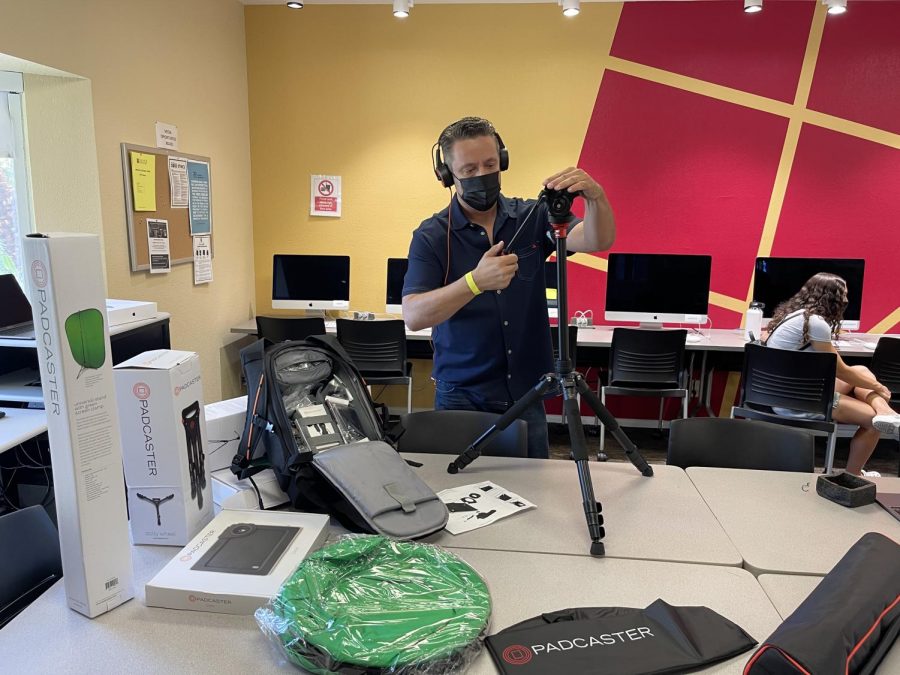 College of the Desert’s film and RTV instructor Jeff Hudson will teach a new course in television field production starting spring 2022. Hudson is well established in the television industry, working on shows such as MTV’s “Fanatic,” “Elimidate” and becoming an executive producer on CBS’s “The Doctors.” Hudson has been nominated for six Emmy Awards for his television producing and for his work as an entertainment executive. He won an Emm​y for Best Informative Talk Show in 2010 for the daytime medical series “The Doctors.” Hudson graduated from Ithaca College with a bachelor’s degree in television and radio, concentrating on public relations and advertising.

During his college years, Hudson had internships with the “Sally Jesse Raphael Show” and “Ricki Lake Show.” Interning for Ricki Lake led to his first production job as guest relations coordinator. He later worked at the “Montel Williams Show” as a production assistant as his first full-time job, where he was promoted to associate producer. There he was responsible for booking interviews and pre-interviewing all the guests.

The job that snowballed his career was a field show called MTV’s “Fanatic.” Field shows are described as something that is not produced in a studio. The show’s premise was to take super-fans to the celebrity of their choice so they could interview them. He enjoyed fieldwork, especially with “Fanatic,” because he could travel all over the country and meet many celebrities.

While working at “The Doctors,” Hudson became the executive producer. It’s a position he had always wanted. The most significant difference between “Fanatic” and “The Doctors” is how they interacted with the fans. “Fanatic” was directed to the single individual. Meanwhile, “The Doctors” was performed for a large audience. “You get an immediate sense of this is working based on the audience’s reaction,” said Hudson.

When asked who motivated him to be in television, Hudson said, “Every executive producer I’ve worked with inspired me in different ways. They all gave me a goal, and that goal was to be an executive producer. I watched from each and learned a little bit of information. Then I would incorporate that wisdom into each of the jobs I did.”

The television industry is competitive and full of jobs. It is an industry based on connections that enable you to get into a position of success–that is the thing that he looks back on. “I’ve been in the industry for 25 years, and I will never come close to the number of people that I should have known.” To help students get their foot in the door, Hudson hopes to connect them with people in the industry to benefit from small projects they have produced or ideas they may want to pitch to companies.

“There are so many different things to try, and for young people, they should try as many things as possible. The more people try things out, the better because then they can decide what works for them and what doesn’t,” Hudson said.

With so many movies and shows produced today, there are plenty of opportunities for people to get into television production. “It is easier to get into the industry because it is so much bigger now with all the streaming services. You have to be passionate and work hard because people are going for the same position,” said Hudson.

Hudson recalls being nominated for numerous awards, but a highlight for him? “My proudest moment was being able to give an Emmy to my mom. My parents were supportive and pushed me along in life.”

After a well-established career spanning more than 20 years, Hudson has chosen to become a college instructor. “There are very few teachers that people look at as an amazing person. They are someone that I will always remember, and it’s so crucial to have people that are hands-on with the learning experience.” He views himself as being a teacher for most of his career because he taught his colleagues the correct way to do things in the industry.

Hudson’s goal at College of the Desert is to assist with developing a television department. He would love to someday have a COD television station in the desert for students to produce their content and create shows.

Hudson’s class is RTV016 Television Field Production. It is a new elective for the Film, Television and Electronic Media AS-T degree and starts on Feb. 1, 2022, and meets Tuesdays and Thursdays from 1 – 3:30 p.m. The class is located in the Media Center on Park View across the street from the COD’s main campus in Palm Desert. Hudson will also be teaching RTV002 Broadcast Announcing on Mondays and Wednesdays from 2 – 4:30 p.m.