‘Parasite’ will win best film of the year 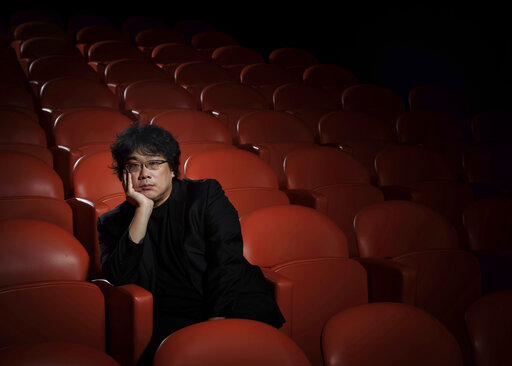 This Oct. 8, 2019 photo shows filmmaker Bong Joon-Ho posing for a portrait at the Whitby Hotel screening room in New York to promote his film "Parasite." The film will open in theaters Friday having already amassed $70.9 million in Bong's native South Korea. In May, "Parasite" won the Palme d’Or at the Cannes Film Festival, a first for a Korean film. (Photo by Christopher Smith/Invision/AP)

The film is off to a winning start. It won the prestigious Palm d’Or at the 2019 Cannes Film Festival. The award is usually a bell-weather for Best International Film at the Oscars. It was runner-up to the People’s Choice Award, ‘Jojo Rabbit’ (previously reviewed), at the Toronto International Film Festival. The movie, along with the famed director, Bong Joon-ho and several actors have also won recognition at other film festivals on the circuit. So far, it has earned an impressive $90 million worldwide, even before its wide release here in North America.

Meet the wealthy Park family and the impoverished Kim clan. It’s their relationships within their respective family and with each other as families that provide such poignant social commentary, contrasting the painful divide between rich and poor in South Korea.

Through a coincidental introduction, the young male Kim comes to work for the Park family, tutoring their only daughter. Poverty has made him, ahem…. manipulative. He hatches a devious “game plan” to push out Park’s existing staff and replace them with his family members. Almost overnight, the Kim family transforms themselves into art therapy, housekeeping, cooking and expensive car experts. Soon enough, they ingratiate themselves into the Park home and become indispensable.

There is a huge dramatic surprise in the second act, revealing a secret third family living in the bowels of the house. Here, humor is replaced by calculated cunning and the worst of humanity.

It’s here we come to understand the meaning of ‘Parasite’ and how they all live off each other to achieve their greedy ends.

In between, there is stunning cinematic symbolism that shows just how masterful director, Joon-ho is. The Kim clan lives in a semi-basement hovel, they walk down into. At their ground-grade window, late-night drunks relieve themselves. Without any dialogue, this simple act of descending their stairs is like a slow, reluctant descent into hell. Kim’s life is Hell and until they meet the Park’s, it seems there’s no escape.

The Park family, on the other hand, climb numerous stairs to ascend to their heavenly mansion, complete with all the material excess that only money can buy. On the surface, they lead a charmed life but as the movie reveals, they too live in a special Hell, only marginally gentler than the Hell Kim’s life, day in and day out.

The Park’s backyard is beautifully manicured, complete with lush lawns and tall majestic trees that speak of money and privilege. The family often sits together in their living room, looking through the floor to ceiling windows to gaze at the beauty in front of them. Serene. Pastoral. Privileged beyond imagination.

The Kim’s backyard is a filthy rat-infested back alley that’s lined with rotting garbage and drunks. Their view from the small urine-stained window is the lower half of people’s bodies, shuffling off to work to look after the rich. Chaotic. Noisy. Nauseatingly smelly. Over time, it’s Kim’s smell of poverty that follows them into the Park household and ultimately helps give their con away.

Joon-ho has worked with this ensemble cast many times before. The audience experiences this symbiotic interplay that adds another layer of beautiful texture to the movie.

Bong Joon-ho has 12 previous films to his credit. The last two, monster movie, ‘The Host’ and sci-fi action film, ‘Snowpiercer,’ became the highest-grossing movies of all time in South Korea. Metacritic named Joon-ho as one of the 25 best directors in the 21st century. ‘Parasite’ proves he deserves to be called one of the best directors of all time.

This film deserves a 5 out of 5 rating.

Gail Pischak is a second-semester film student who wants to make short docs in the future. Her passion is movies, movies, movies.