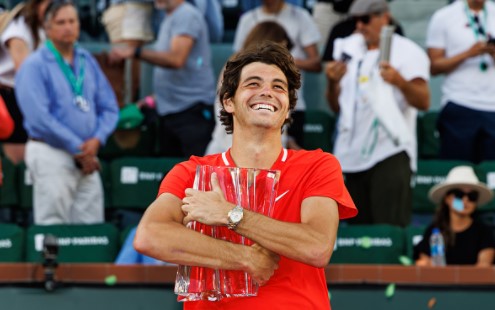 At the age of 24, Taylor Fritz has already won an ATP Masters 1000 tournament, been ranked as the top American, and accomplished that by taking down one of the most successful tennis players in the past twenty years, Rafael Nadal. None of that has been a surprise to his father, former professional tennis player Guy Fritz, who has quite the eye for talent. Guy had trained several high-level colleges and professional players in southern California and coached Taylor from when he was two years old until he was eighteen. When talking to Guy, he stressed how important it was for him to be able to help Taylor in every way he could.

Taylor started playing tennis at the age of two and slowly became less consistent with it by the time he was four, only playing every month or so. When he was seven, Taylor started playing consistently again with Guy and other kids doing clinics with his father. Guy said that they would all play football, soccer, or various other games after the clinics. When Taylor initially wanted to play, he was told that he would have to participate in the training to play with everyone afterward. He was more consistent with tennis, training with Guy during those clinics and in his free time.

Taylor is known to have a repetitive, consistent routine every night before a match that he has used for years now. Discussing his influence on that type of preparation, Guy said that he also did similar things when he was playing. A big part of that consistency was nutrition. Guy, from the start, had recognized the importance of his son’s nutrition. He made sure to avoid energy drinks and specific supplements. Guy noted the huge prominence of sugary and processed foods in schools and everyday life for kids growing up. It was almost impossible to keep these foods away from Taylor completely, but at home, the family always had clean, healthy meals.

When talking to Guy about Taylor’s upbringing and early career, he admitted that there was a lot of sacrifice and difficult decisions made along the way. When he was a freshman at Torrey Pines High School, Taylor had an incredible start in his high school tennis career. He won CIF singles as a freshman and was the CIF San Diego Section player of the year. After a trip to a tournament, though, Taylor felt that his competition level was too low to improve and face the challenges he needed to. Because of this, Taylor switched to online school to compete in ITF Juniors’ tournaments full time, which Guy said was difficult and expensive but contributed immensely to his development.

Even though Taylor had already been in online school and competing full time in ITF tournaments, Guy still wanted him to consider college tennis. They had discussions with USC and UCLA, and Guy thought it would be in his son’s best interest to go to college, even if it was just for a year or two, to develop more physically and put some weight on to get stronger. Guy was unsure if Taylor, as a tall and thin seventeen-year-old, was completely ready to handle the constant travel and increased physical toll of a full-time pro career. Potential injuries and struggles were a reason why college tennis was appealing. There were programs at some schools with interest that would uphold the player’s scholarship for later graduation even if they went to play and came back years later for the degree. After deciding to forego any college, Taylor immediately proved he was ready. After his first tournament win, he consistently reached the later rounds of his tournaments and started beating top 10 players.

Taylor Fritz is very familiar with the Indian Wells Tennis Garden and aware that it is considered his home tournament. After an amateur play-in tournament for the Indian Wells Open, Guy told him that he would win the tournament one day. On Sunday, March 20, 2022, Taylor beat one of the sports’ true icons, Rafael Nadal, to win his first Masters 1000. He almost did not even play due to an ankle injury from the previous round. Guy stated that the two consistently communicate before matches and tournaments. Sometimes Guy offers tips or updates on a future opponent, and they also talk about whatever might be bothering Taylor, which this time was the ankle. Guy was not surprised that he decided to play on it. He stated that Taylor had always been persistent in playing every match he physically could, even if it would be painful. Taylor was advised against it by his medical team, but after a practice session to test it out, he decided to have them wrap up the ankle, and he was ready to play.

It is no secret that tennis has been a mostly European-dominated sport for the last fifteen to twenty years. Taylor is the first American man to win the singles tournament since Andre Agassi did in 2001. It was also the first time America was even represented in the final match since 2012. Along with the fact that many of the top European players such as Novak Djokovic, Roger Federer, and Nadal are all in their mid to late thirties or forties, Guy sees this win as what could be the start of a huge opportunity for a young up and coming group of American tennis players to take hold of the sport. He sees Taylor being the number one American as a chance to capitalize on the patriotism that fans often root with, and he could start a huge wave in tennis popularity here.

The whole family never really got to get a complete celebration with Taylor for the win. They congratulated him on the court and had a few moments, and then he had to do interviews, press conferences and eventually drive back to Los Angeles to fly to Miami the next day. Guy and the rest of the family went out to dinner together, but Taylor couldn’t be there due to the constant travel involved in tennis. This is all travel that Guy is familiar with as a former player and having traveled to almost all of Taylor’s tournaments at the beginning of his career. Although he does not go to every match now, he still occasionally travels to them and tries to go to almost all of the tournaments that are in the summer or in America.

Even though he isn’t Taylor’s full-time coach anymore and does not travel to every match, Guy still prides himself on being able to support and help Taylor in every way he can. Whether it is being an extra voice of reason, talking about a player he knew about, or occasionally negotiating off the court deals and contracts, he remains involved in every way possible.

Guy Fritz is currently leading the College of the Desert men’s tennis team through the playoffs.