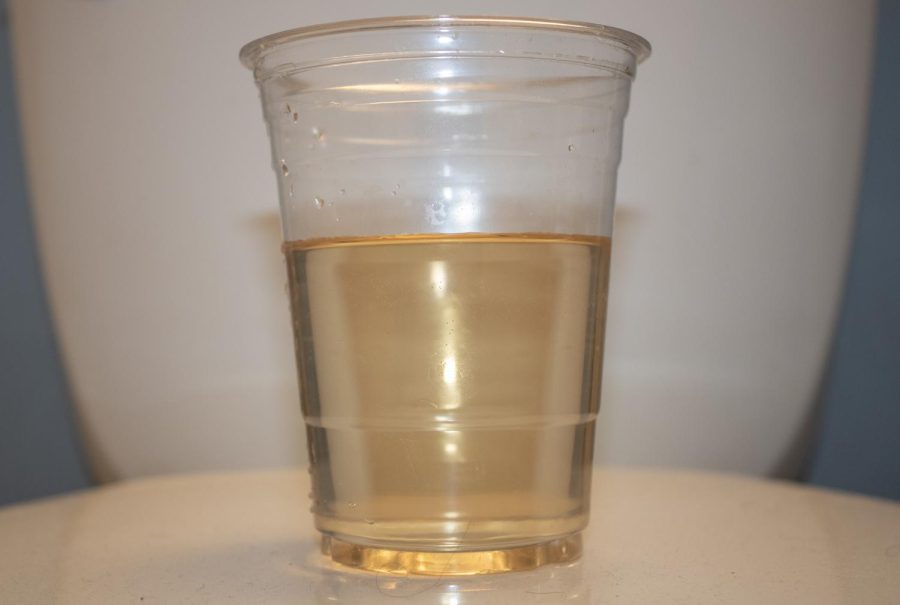 Photo Courtesy of The Chaparral. A sample of contaminated water in the Eastern Coachella Valley.

Out of the $10 million relief fund, $2.7 million will be solely used to fund the Avenue 66 Clean Water Project, aiding and protecting families’ rights to clean drinking water. With other projects and health care funded, the Avenue 66 Clean Water Project was funded the most, ensuring residents have heard their voices throughout the fight for clean drinking water.

The contaminated water circling these residential and trailer park homes contains hazardous arsenic levels, which Dr. Ruiz claimed as “simply unacceptable” as he continued to work with the Environmental Protection Agency (EPA) to find solutions to protect those affected – according to Dr. Ruiz’s press release.

Although residents are thrilled over the new construction water transmission line arriving in the Eastern Valley, other residents are left concerned, wondering what this news means to them now.

Though content about the news, a trailer park resident, Mariana Gonzalez, 17, still had concerning thoughts. “I am very pleased,” she said. “I am pleased because my home will now feel like home, but I am filled with questions,” Gonzalez continued. “I have been living here for most of my life, and sometimes it is hard to trust that we will be getting help.”

Gonzalez mentioned a situation of how the Eastern Coachella Valley receives help. “Not too long ago, a town, North Shore, suffered after a two-day storm hit. Many residents lost their homes, battling the summer heat as electrical poles were knocked, and power was not restored until days later,” she said. “They received help a few days later, but in between, the residents, local businesses and facilities helped out.”

Regardless, Gonzalez has noticed the advocacy Rep. Raul Ruiz displays for the Coachella Valley, especially the ECV. “It is no secret that Dr. Ruiz has been trying to protect us residents since he became representative,” she said. “He has been a true advocate for our people, and although I’m not into politics, I am sure it was hard for him [Dr. Ruiz] to secure a new water transmission line, but he accomplished it, and we [the ECV] are extremely grateful.”

Before the news, ECV residents were given heart-wrenching news. They had entered another year, and no signs or talks about the contaminated water appeared. Instead, an article about a proposed golf course would be arriving in Thermal, Calif., a community located in the ECV.

The news left residents stunned. Many took their concerns, opinions and anger onto social media, mainly Twitter and Instagram. These posts included talks about the cost of water that this golf course would consume. Others pointed out the ignorance of bringing a “high-luxury” golf course to a low-income community.

ECV Resident Paola Gamez, 22, emphasized the insensibility of ignoring a decades-worth of activism performed by ECV residents for clean drinking water and instead gave the ECV a golf course for the rich. “When I first saw the news, it was displayed all over my social media. My close friends kept re-sharing the information and leaving their thoughts about the entire thinking process,” she said. “It was very insensitive to start construction bringing a golf course to the area while many communities battle tainted water,” continued Gamez. “The golf course, surrounding agricultural land, is not for Thermal residents, nor are they for Mecca, Oasis – the actual ECV residents. They are for the rich and only the rich because they can afford that luxury.”

However, months later, the news changed. Thanks to Rep. Raul Ruiz, the ECV will start constructing a new water transmission line, bringing safe drinking water. Though frustrated initially, Gamez was thankful that the contaminated water was being dealt with. “In the beginning, I was pretty discontent because this has been an ongoing problem that needs to be heavily focused on. I am happy that Dr. Ruiz is the one who gets to help with the ECV. He has been heavily involved and has positively influenced us,” she said. “Dr. Ruiz always visited us in high school. He has been a great supporter and has paved the way for Hispanics and Latinos.”

Dr. Ruiz, originally from Zacatecas City, Mexico, grew up in Coachella, Calif., and has been a U.S representative since 2013. His story is not only remarkable and inspirational. He has advocated for his community and has accomplished notable projects within the 36th congressional district.