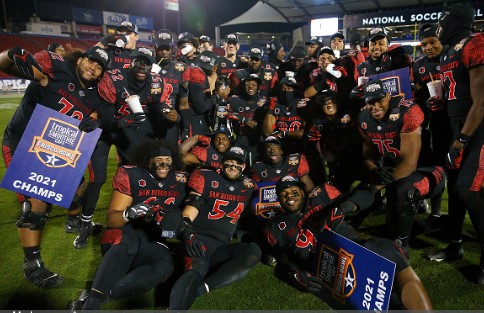 Thompson graduated from palm springs in 2016 and played five seasons with the Aztecs, and redshirted his second year because of an injury. He was not a full-time starter until his final year in 2021, in which he was named a second-team College Football Focus All-American, a Pro Football Network third-team All-American and made the All-Mountain West first team. Thompson played in 57 career games in those six seasons, tallying up 147 tackles, one sack, one interception and two blocked kicks.

Hawkins also graduated in 2016 from Palm Springs. Tayler redshirted his first year, then played the next five.  Hawkins was a second-team All-Mountain West selection and a 2020 All-Mountain West honorable selection. In his career at San Diego State, Hawkins totaled 108 tackles and an interception.

Whelan, born in Ireland, played for two years at Rancho Mirage High School before signing with UC Davis. He saw limited playing time in his true freshman season and was a starter by his sophomore year. He was the team’s main punter through his last year in 2021. He only played in the five games the team played in 2020 due to the pandemic and came back with an extra year of eligibility in 2021. Whelan averaged 43 yards per punt, was a three-time selection to the All-Big Sky team and was a two-time All-American.

College of the Desert graduate and UCLA defensive lineman Datona Jackson is likely to have interest from many NFL teams for a possible training camp invite. Jackson was born in Desert Hot springs and grew up in Ohio. After high school, he moved back to the Coachella Valley to work for four years before eventually playing on the COD football team. Jackson then played at UCLA for three years and is now just waiting for the right call.

Whelan, one of the higher regarded punters in college, is most likely to make the team and possibly start. Thompson, Hawkins, and Jackson will probably compete for special teams or rotational roles to get a roster spot and playing time.