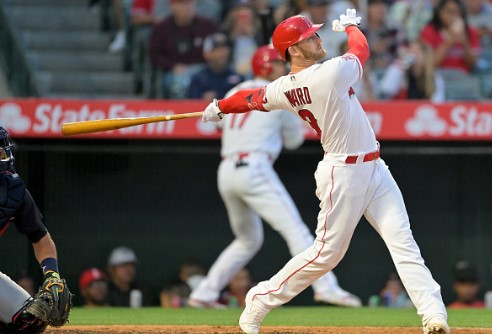 Taylor Ward is an emerging star for the Angels. After struggling to get playing time and keep a spot with the Major League team at times, he is now not only the Angel’s starting right fielder but arguably their best overall hitter this year. To start the season, Ward has played in 18 games and has a .375 batting average, 6 home runs, 15 RBIs and according to the OPS+ stat, he is over two and a half times as productive as the average hitter. Thanks to his play, Ward was named the American League Player of the Week for the first time in his career.

Ward was born in Dayton, Ohio, and moved to the Coachella Valley prior to his Sophomore year in high school. In its first year open, he attended Shadow Hills High School and was an immediate star as the catcher on the baseball team. In his three years with the Knights, Ward was named first-team all De Anza League twice, was the league MVP, offensive player of the year, was named first-team all CIF and became the first student in school history to earn a Division 1 athletic scholarship. He was picked in the 31st round of the draft by the Tampa Bay Rays but declined to sign in order to play for Fresno State.

Ward rotated between the outfield and catching in college before becoming the team’s full-time catcher in 2014 and 2015. In 2015, Ward was named to the all-mountain west conference team and first team in 2015, starting every game the Bulldogs played. During his college career, Ward showed enough versatility for the Angels to select him in the first round of the 2015 draft, 26th overall. He spent his first few years in the Minor Leagues and on August 14th, 2018, Taylor made his MLB debut against the Padres.

Taylor’s first couple of seasons were both plagued with injuries and inconsistency. He had not played a full season yet, coming closest to that in 2019 when he played in 65 games. Ward never really found a home anywhere on the field until this year. The Angels had switched him around, having him play first base, third base, catcher, and all over the outfield. In his first year having a set spot to play, Ward is having the best defensive production of his career and, for the first time, is grading out to be an above-average outfielder. Taylor’s offensive success this year could be connected to his decrease in strikeouts and the highest walk rate of his career. From 2018 until last year, he struck out almost 30 percent of the time and walked less than 10 percent. His walks have more than doubled this year, and he strikes out only 20 percent of his appearances. So the biggest factor for Ward’s success this year is that he is putting the ball in play more than ever, and he is not chasing bad pitches resulting in strikeouts.