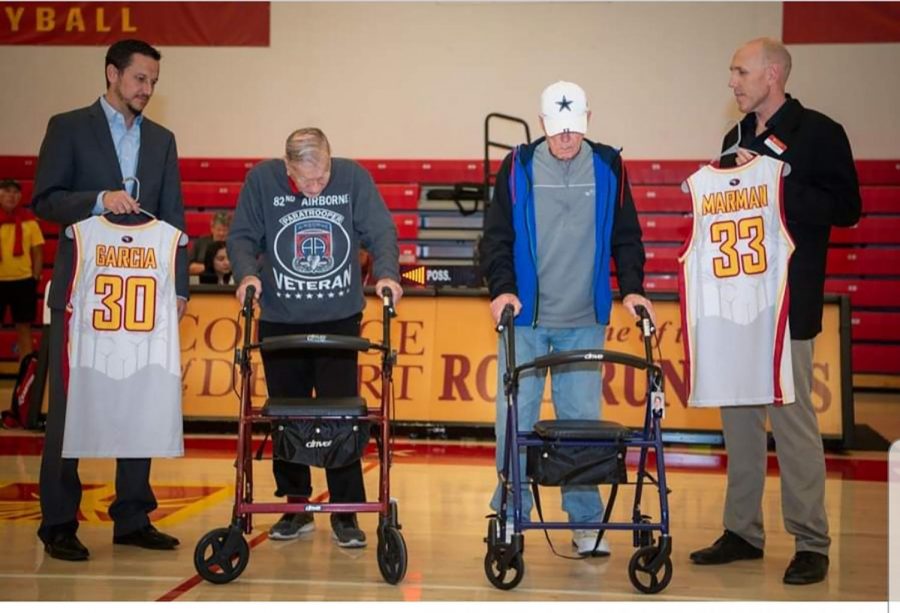 On Feb. 12, College of the Desert athletics held a ceremony honoring of John Marman, Frank Garcia and Don Thompson.

COD athletics honored the three by giving Garcia and Marman their own basketball jerseys, while Thompson received a baseball jersey.

Garcia coached the COD basketball team for 20-years, but before coming to COD, Garcia coached at St. Mary’s College. Then in 1968 became the roadrunners head coach, winning a total of 396 games.

During the start of his career at COD the Desert Sun said, “Garcia has the Johnny Wooden touch, with the aggressiveness of Bob Boyd”. John Wooden was the head coach for basketball at UCLA and Bob Boyd coached at USC.

Coach Thompson coached the baseball team from the start of the program in 1965 and held the job for 19 seasons. In his first six seasons he won 4 conference titles. When he announced his retirement on May 14, 1984, the school decided to place a flag in center field to honor him.

Marman coached 10 different sports, starting off with track and field in 1969 and two years later became the defensive back coordinator for the COD football team, eventually taking the head coach position from 1982 to 1986.

During Marman’s time, the team held a record of 28-22, won a conference title, took home the Southern California Bowl against Golden West and ranked 12th in the nation. Marman accomplished these titles in his last season as the head coach. After his retirement, he became the athletic director from 1976 to 2002.

All three coaches had dominating seasons, having their teams win conference titles multiple times, became role models on and off the field.

During their careers, there was a lot of support from the public, their teams and the COD athletics department. As time goes on, they will be remembered as some of the best coaches COD  had to offer and will continue to inspired future athletes.