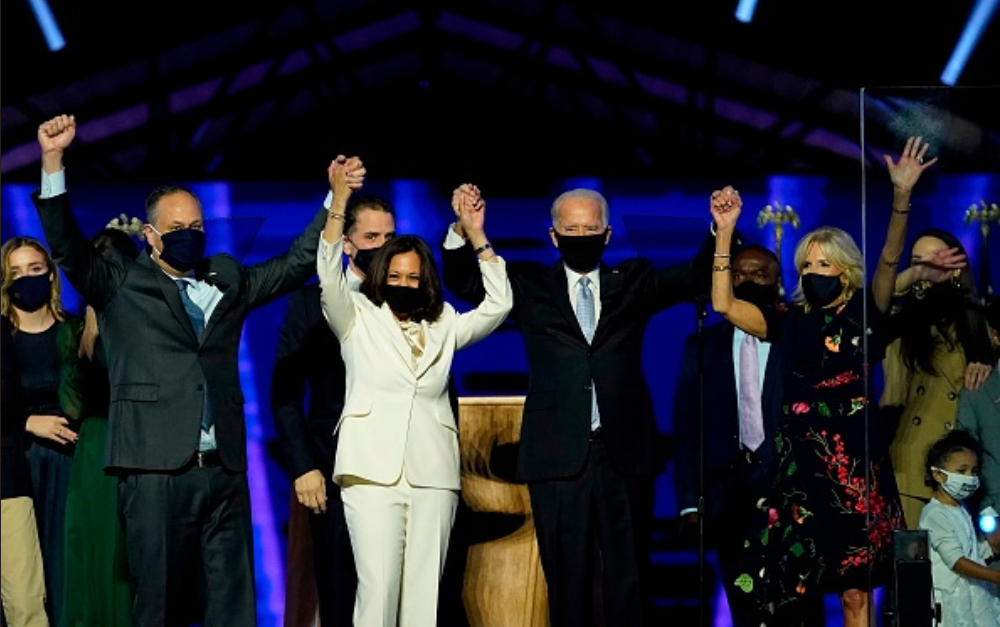 WILMINGTON, DELAWARE – NOVEMBER 07: President-elect Joe Biden and Vice President-elect Kamala Harris, stand with their spouses, Dr. Jill Biden and Douglas Emhoff, after addressing the nation from the Chase Center November 07, 2020 in Wilmington, Delaware. After four days of counting the high volume of mail-in ballots in key battleground states due to the coronavirus pandemic, the race was called for Biden after a contentious election battle against incumbent Republican President Donald Trump. (Photo courtesy of Getty Images) (Andrew Harnik-Pool)

WILMINGTON, DELAWARE – NOVEMBER 07: President-elect Joe Biden and Vice President-elect Kamala Harris, stand with their spouses, Dr. Jill Biden and Douglas Emhoff, after addressing the nation from the Chase Center November 07, 2020 in Wilmington, Delaware. After four days of counting the high volume of mail-in ballots in key battleground states due to the coronavirus pandemic, the race was called for Biden after a contentious election battle against incumbent Republican President Donald Trump. (Photo courtesy of Getty Images)

After nearly four days of the world anxiously waiting, on Nov. 7, former Vice President Joe Biden officially won the 2020 election to become the 46th President of the United States with a final victory in Pennsylvania. For Kamala Harris, this victory marks the first time a woman and a woman of color is vice-president.

In the beginning, President Trump was leading the election before Joe Biden began to catch up when mail-in ballots started to be accounted for. Most of the states stayed in with the same party they had previously voted for, with Michigan and Wisconsin flipping to democratic states, but those states deciding the election would be Nevada, Arizona, Georgia, Pennsylvania and North Carolina.

For what seemed like an eternity, the world stood still awaiting results from these five states. Then, in the morning on Nov. 7 president-elect Joe Biden was decarded the projected winner for Pennsylvania, a state with 20 electoral votes to help Biden’s 253 become 273, surpassing the 270 winning mark.

As soon as the news broke that the Biden Harris ticket had won the election, voters and non-voters from across the United States celebrated publicly to honor their victory. On the other side, those in support of the President have lashed out and voiced their disapproval, fully believing that the election was rigged and meant to sway towards the democratic side. Trump’s supporters are demanding a recount of the election.

President Trump’s response to Joe Biden’s and Kamala Harris’ victory was anything but celebratory as he refuses to concede. During the election, when voters were still being accounted for, Trump filed legal action against several states for voter fraud and claims that the election was being stolen from him without evidence.

On Twitter, Trump had declared himself the victor then ranted about the election after Biden and Harris were declared the official winners. Whether or not the election will be recounted is still in the air, but Trump has made it clear that this election is far from over.

Voter turnout for the election is predicted to near an all-time high, with the number of people voting already surpassing that of 2008 and 2016’s turnout. Right now, according to an article from The Washington Post, 62.5% of the eligible voters have voted with more to be accounted for.

The turnout highest in recorded history was 65.7% in 1908 when the 31st President Republican William Howard Taft defeated Democrat William Jennings Bryan. This year’s projected turnout is expected to surpass that margin with 66.3% voter turnout. Even if we don’t break the record this year, the United States must be proud of the number of people that voted this year.

Joe Biden and Kamala Harris may have won the presidency, but they will take over a country in turmoil. The United States is in a crisis with COVID-19 running rampant with the number of cases increasing exponentially, protests and riots taking place over racial injustices taking place every so often, the police seemingly looking like villains in the eyes of many, the economy is nearing a complete collapse with over a 10 million people unemployed with a large count of those same people being homeless and many more problems. In short,

Biden and Harris will have a full plate, but the people of the United States should have faith that they can get the job done.

Although legal action may take place, and there is a possibility that Trump may actually reclaim another term, right now, the world knows one thing. Joe Biden and Kamala Harris are next in line to lead the United States.

Jonathan Cardenas, a COD student who’s majoring in business administration and film production said, “As a California resident, proud democrat and Latino voter, I couldn’t be happier about the election results. When I saw Joe Biden and Kamala Harris announced the 2020 presidential election winners, I smiled and got emotional. For some, this election might not have had much importance. For me, a person with a preexisting condition, a person of color, because I am Latino and someone who is a part of the LGBTQ community, this election felt personal.”

Like most, I watched for days with the ups and downs and the states’ color changing from possible reds and blues. Watching Biden and Harris address our country only fueled my desire for them to win. From my perspective, our nation needs leaders that unite people and not divide us by wealth or race. Diversity is what makes America beautiful, and I genuinely feel that this victory inspired me and our country’s hope for a better future.

Even in a pandemic, I think people are more optimistic about our government getting this virus under control and resuming some sense of normality in our country with Joe Biden and Kamala Harris in the White House.

The Chaparral • Copyright 2022 • FLEX WordPress Theme by SNO • Log in