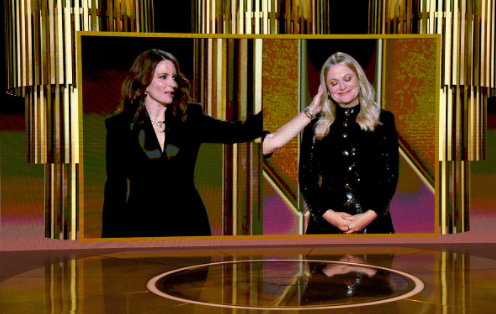 Hosted by Tina Fey and Amy Poehler, the Golden Globes 2021 were considered a success this year. Pulling off a bicoastal broadcast amid COVID-19, the 78th Golden Globe Awards was made available for both East and West coasts of the United States.

According to Entertainment Tonight, “Instead of the A-listers filling the room, frontline workers were invited to attended the ceremony in person as a thank you for tirelessly working amid the COVID-19 pandemic.”

All the actors and actresses were able to be seen virtually from their homes and give their full speeches when allowed to. Although this year’s Golden Globe was not in person, the magic of it all was still there.

“Nomadland” won as the best motion picture. It is a story about a woman who loses everything in the Great Recession and embarks on a journey through the American West, living as a van-dwelling modern-day nomad.”

This film made history by being the first film, directed by a woman, to win the best picture in the Golden Globes’ 78 ceremonies. With the director, Chloe Zhao winning best director of a motion picture.

A writer, producer, editor and director, Zhao feels it is easier to direct when you have the power to be the writer. She says in an interview, “I’ve never done a film where I am not a writer. I don’t know what that struggle is like because I’ve always written the film I’ve directed.”

She goes on to say, “Many times, you’re the only person who knows the bigger picture. If you hold on too tight, you are going to kill it, so it’s a very delicate balance that I don’t think I will ever perfect, but each day is improving.”

Many times you’re the only person who knows the bigger picture. If you hold on too tight, you will kill it, so it’s a very delicate balance that I don’t think I will ever perfect, but each day is improving.”

Making a huge impact on women worldwide, Zhao becomes the second woman to win a Golden Globe for directing. Zhao thanks her fellow nominees in the category while accepting the award. She also accepted the award for best picture on behalf of “Nomadland.”

In Zhao’s thank you speech, she says, “‘Nomadland’ at its core for me is a pilgrimage through grief and healing,” she said. “So for everyone who has gone through this difficult and beautiful journey at some point in their lives, this is for you. We don’t say goodbye. We say, ‘see you down the road.'”

The story of singer Billie Holiday was brought to life with Golden Globe winner Andra Day in the motion picture, “The United States vs. Billie Holiday.”

“I didn’t anticipate I would go into acting this soon or start with a role like this,” Day says, according to People. “I didn’t want to do this when it was first brought to my attention because I love Billie Holiday. I was nervous. I was terrified. I said ‘no’ multiple times.”

Until she finally said yes, that one yes lead up to her performance that would guide her to her first Golden Globe win.

Jodie Foster won best supporting actress for her film “The Mauritanian.” The film is about a defense attorney, her associate and a military prosecutor. They uncover a far-reaching conspiracy while investigating the case of a suspected 9/11 terrorist imprisoned in Cuba.

Foster’s fourth Golden Globe win, with winning best actress in 1989 and 1992 and winning the Cecil B. DeMille award in 2013.

The Packers fan ended up thanking Aaron Rodgers in her thank you speech. When Rodgers was named the 2020 NFL MVP, he thanked Foster in his acceptance speech, knowing she was his biggest fan.

In a Jimmy Kimmel Live interview, “Kimmel asked Foster if she knew Rodgers, and she said, ‘No,’ but clarified, ‘he knows I’m his biggest fan. Kimmel then asked, ‘If you win the Golden Globe, will you name him in your speech?’ Foster answered, ‘Absolutely.'”

Foster kept her promise as she thanks her wife, dog, and Aaron Rodgers.

She goes on to say, “‘I don’t have his words, but we have to take all the moments to celebrate those we love.”

Although he is no longer with us, his mark will forever be made. Boseman fought bravely in his private battle with colon cancer for four years.

Daniel Kaluuya won best supporting actor in his film Judas and the Black Messiah. A film about the story of “Fred Hampton, Chairman of the Illinois Black Panther party, and his fateful betrayal by FBI informant William O’Neal.”

Kaluuya won his first-ever Golden Globe 2021. Unfortunately, while giving his thank you speech, there were technical difficulties, which lead to him being inaudible in his speech.

Once things got back in order, he finished his speech by saying, “‘It takes a village to raise a film, so I’d like to thank our leader, our general, [director] Shaka King, for your vision and your collaboration.”

Although the Golden Globes this year was done through a broadcast, it was still a success. To see this full list of winners and nominees, click here.

The Chaparral • Copyright 2023 • FLEX WordPress Theme by SNO • Log in